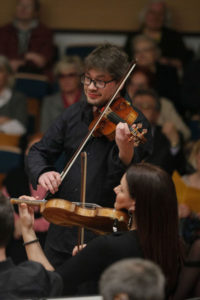 The violinist Gregory Ahss began his training at the Gnessin Institute of his native Moscow, continuing studies at the Israeli Conservatory of Music and at the Tel Aviv Music Academy; he graduated from the New England Conservatory in Boston. While still a student he founded the Tal Piano Trio, which has garnered numerous awards. From 2005 to 2011 Ahss served as concertmaster of the Mahler Chamber Orchestra, and since 2012 he has held the same position with the Camerata Salzburg; in addition he is a member of the LUCERNE FESTIVAL ORCHESTRA, where he has been concertmaster since 2009. As a soloist he has collaborated with such conductors as Claudio Abbado and Yannick Nézet-Séguin and with orchestras like the Swedish Radio Symphony Orchestra and the Orchestra Mozart. Among his chamber music partners are the cellists Natalia Gutman, Gautier Capuçon, and Valentin Erben; the clarinetist Sabine Meyer; and the violinist Daniel Hope.