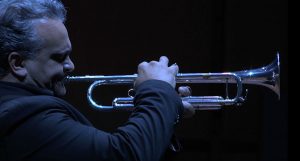 Andrea was born in Viareggio (Lucca, Italy) on July 26, 1965. Mentioned on Wikipedia in 5 languages and in many other music books and encyclopedias, he began to study music and trumpet in 1975 in the wind ensemble of his village Torre del Lago Puccini with some musicians close to Dean Benedetti, the famous italo-american jazz saxophonist mentioned in all official Charlie Parker biographies. In 1979, at the age of 14, Andrea started working locally with some professional big bands and commercial music groups, and in 1981 he began performing professionally in the classical music field too, while simultaneously attending the Conservatory at the «Istituto Musicale Pareggiato L. Boccherini» in Lucca (Italy). In 1987 Andrea finished his Conservatory studies with highest full marks, graduating cum laude. That same year he studied with Armando Ghitalla (soloist trumpet with the Boston Symphony Orchestra and teacher at the University of Michigan) and consolidated his jazz studies with O. Valdambrini and S. Fanni, trumpet soloists of the RAI Television Orchestras in Rome and Milan.

On September 20th, 2006, he has been invited to perform as soloist at the “Maynard Ferguson Tribute” at the Touhill Performing Arts Center in St. Louis (Usa), now released also in dvd (2007). Moreover, in 2014 Andrea accepted to join the authoritative “Board of Directors” of the International Trumpet Guild and has been elected until 2019 by official votation of the ITG international members. He performed as soloist at the ITG Conferences in 2008 (Banff Center, Canada), 2010 (Sidney, Australia) and 2012 (Columbus University, Georgia, USA) and 2015 (Columbus, Ohio, USA). In 2018 he joins the team of artists/clinicians of the prestigious «World & European Brass Association» founded by Otto Sauter, based in Germany with worldwide concerts.

In 2008 he received the Visa O-1 for Extraordinary Ability in the Arts from the United States of America Government.