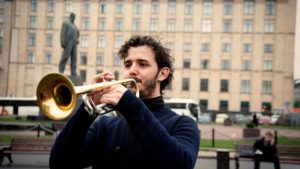 He was awarded the Bronze Medal of the Italian Republic in 2003 for his achievements as an active member of the European Union Youth Orchestra. An avid chamber musician, Tomasoni is a member and co-founder of the eclectic wind quintet Italian Wonderbrass.

Omar Tomasoni has a C trumpet, built by Gerd Dowids, on loan from the Foundation Concertgebouworkest. This instrument is a gift from the Freundeskreis Schweiz, the Swiss Circle of Friends of the Concertgebouw Orchestra.